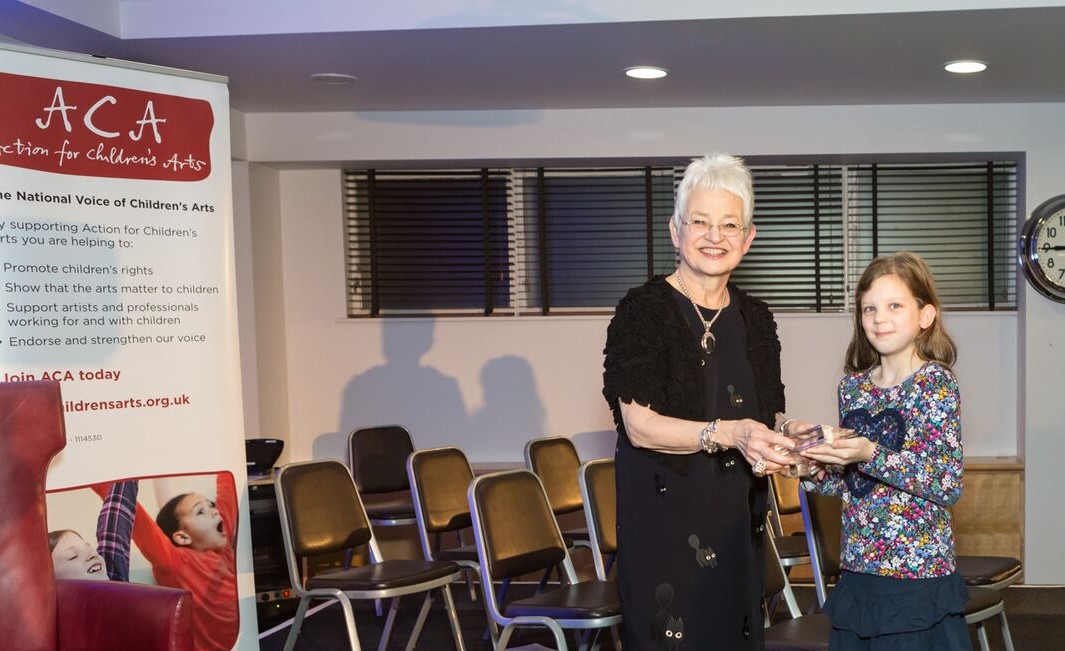 This year’s J M Barrie Award has been presented to the much-loved children’s author, Dame Jacqueline Wilson for a lifetime of unforgettable writing for children.

Jacqueline Wilson is one of the UK’s favourite children’s authors whose work is loved by her legion of loyal fans.   Best known for characters such as Tracy Beaker and the Victorian foundling child, Hetty Feather, over 38 million copies of her books have been sold in the UK and they have been translated into 34 different languages.   Jacqueline Wilson was Children’s Laureate from 2005-2007 when she spearheaded a campaign to encourage parents and carers to read aloud to children.   She was awarded an OBE in 2002 for services to literacy in schools and then was awarded a DBE in 2008.   She is currently Chancellor of Roehampton University where she is also visiting professor of Children’s Literature.

Nick Sharratt, Jacqueline Wilson’s long-standing illustrator gave a tribute to Jacqueline as part of the ceremony accompanied by the present and previous Children’s Laureates.   Malorie Blackman OBE, Laureate from 2013-15 read the citation for the award and Hebe Russell, aged nine, along with Chris Riddell the current Children’s Laureate, presented Jacqueline with her award.   Other icons of children’s literature present in the audience included Michelle Magorian, Lynne Reid Banks, Jamila Gavin and Jan Pienkowski.

The Outstanding Contribution Award went to Sir Ken Robinson, inspirational advocate of creativity in education.   His talk, “Do Schools Kill Creativity?” is the most viewed in the history of TED and has been seen by millions all over the world.  Kenneth Olumuyiwa Tharp, Chief Executive of The Place, delivered a tribute to Sir Ken, who, although unable to be present, sent an inspiring video. His award was collected by his daughter, Kate Robinson.

David Wood OBE, chair of ACA said “Children are the future.  The arts practitioners who specialise in entertaining and inspiring them and triggering their imaginations deserve, Action for Children’s Arts believes, public recognition.  This is the 11th year of the J M Barrie Awards.  We are proud to honour Dame Jacqueline Wilson, Sir Ken Robinson and our Members’ Award winners, Carolyn Mairi L.Forsyth, Sahana Gero, Daniel Jamieson, Trustees’ Award winners Mike Kenny and Charles Way.  They are all brightly-shining beacons in the vibrant world of children’s arts.”